The cabeceo is considered an “Argentine” method of asking someone to dance. And honestly, it is not easy for us North Americans to feel comfortable staring at someone so directly. But once you get the hang of it, it’s definitely a great way to acknowledge your mutual interest in dancing together.  A relaxed version of the cabeceo works great in other dance styles too. I’ve found much success just smiling and making eye contact with someone next to the dance floor to indicate my interest in dancing.  No words need to be spoken, which only makes sense, as dancing is non-verbal communication at its finest. 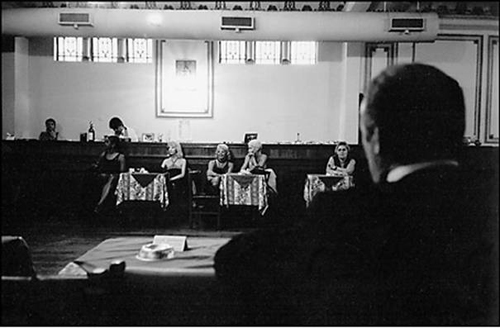 In today’s story by Tanguera Escondida, she considers the challenges and benefits of the cabeceo. Enjoy!

My tango partner, Klondike, often tells me that tango dancing is like sex.

“You don’t let sex just happen to you, do you?” he always says. “So why do you let tango just happen to you?” Because I love to dance. Because I don’t want to sit on the sidelines all night. Because the music inspires me.”Every time, he slowly shakes his head. “Someday, you’ll learn why it’s important to be picky.”

This is coming from the pickiest man I know in tango. A man who sits out almost all night, monitoring every passing follower, examining the way she moves, connects, her rhythm, every nuance and subtlety. Her foot positioning, the expression on her face. Her expression, people. Is she smiling? Frowning? Does it look like she’s having fun? Is she a nice person?“Why does her facial expression matter?” I ask, over and over. “This is tango. You don’t even see her face.”“I don’t want to dance with a woman who looks like she’s all stressed out,” he says simply, then turns back to the dance floor to watch and watch and watch, with the tiniest of smiles. The amount of scrutiny he puts into picking a follower is mind-blowing.  Sometimes, he doesn’t pick a single one until the last 30 minutes of the milonga. Dances once, then goes home.  (He and I do dance quite a bit together; this is how he picks his other followers).

Then there’s the other end of the spectrum, people who just dance willy nilly with whomever, and have taken the cabaceo to another level entirely. I know one woman who walks within three feet of a leader, stares him down like it’s some sort of staring contest, and pops one hip out in a sexy way. Doesn’t hurt that she’s always wearing some sort of clingy dress. He glances at her, sometimes with trepidation, like he doesn’t know how to handle this very forward creature.  She glances to the dance floor, he nods, sometimes frightened, and it’s on. She dances with exactly who she wants to dance with. She dances every tanda. She prowls around the dance floor like a panther.

Both she and Klondike are examples of extreme tango behaviors. But they both pick exactly who they want to dance with and make it happen. I just want to learn how to cabaceo in a way that will land me exactly between these two.  Which means dancing with maybe three of my friends, and one or two new people per night. Which means employing a cabaceo that’s somehow subtle, but forward enough for a leader to notice. No easy task. Historically, I’ve said “yes” to dance partners because they seem like nice people. I size them up quickly, examining their smile, their attitude, their body language. If they seem sweet, I say “yes.” Sometimes, this approach is met with disastrous results, and I walk off the dance floor with the sick feeling of disappointment. Or the feeling of being completely man-handled and thrown around. “Domestic violence,” as Klondike calls it. Or the feeling that I was just doing salsa or swing rather than tango.

“You have to watch the leaders first,” Klondike says. “Pick the ones you would like to dance with. Then try to position yourself near them during the cortina, or meet their eyes.” Heh.  All of the above is very difficult for an introverted person like me. However, I do understand why cabaceo is important in tango. It saves  leaders the embarrassment of walking across the dance floor, then being rebuffed, then having to endure the “walk of shame” back to one’s seat. It saves followers the difficult task of saying “no.” It saves followers from being chased all over the ballroom.I’ve had some unfortunate experiences myself. There was the guy who waited for the tanda to be over, and blocked my way to the bathroom, with a huge smile, to ask me to dance. And another who walked right up to me, and when I didn’t meet his eyes, he tapped me harshly on the shoulder and asked me to dance. Both these men I had to say “no” to, and it was awkward. All this awkwardness would have been avoided if they’d mastered the art of the cabeceo.

I have been taking baby steps when it comes to practicing the cabeceo. One time, at the Verdi, I managed to look halfway across the room at a man I already knew, who happened to be standing by the door. He nodded, I nodded, and there we had it. We danced, and it was great. But does the cabeceo really count if I do it only on leaders I already know? There are many, many leaders I would like to dance with in San Francisco, but I am too shy to stare. I can’t bring myself to walk over and stand near them, willing them to ask. I am afraid of saying “yes” to the wrong person. I’m afraid of saying “no” to the right person. I don’t want to ask a leader to dance. I want to abide by the “rules” of tango, no matter how old-fashioned they might be.

So, like Klondike says, I won’t let tango “just happen” to me. I’m going to try harder, overcome my fear, and make more eye contact. I’m going to dance with new people, even though I might not always have the time to watch them first. But I am going to try to watch more as well, and figure out exactly who I want to dance with and make it happen. If I can do these things successfully, then maybe, someday , I’ll be able to find my own happy medium.