A nuit blanche, (sleepless night in English), is something many of us may have recently experienced at SFTM this past weekend.  A night of which we do not sleep, is apt to be full of surprises and unexpected twists, much like a good story.

Thus I expect the latest production by Union Tanguera (directed by Claudia Codega and Esteban Moreno), shall be equally intriguing. The show is only one night here in the Bay Area… this weekend at Cal Performances, UC Berkeley’s Zellerbach Hall. At this posting, tickets are still available. 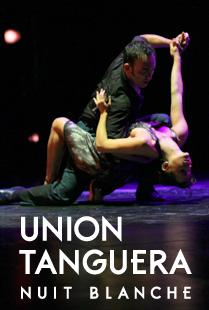 One can’t help but be enticed by this description:

“Nuit Blanche is a tangueran exploration about night. An exposure of its demons, fears, desires, instincts and fantasies…A club, one night, a crowd: a sleepless night. A sleepless night to light the night, when alcohol and isolation bring people together…and tango as the only way to let the bodies express themselves.”

Nuit Blanche or Sleepless Night, first performed in 2010, is the third creation of Union Tanguera.  The music is a combination of traditional tango recordings with live original compositions. Both acoustic and electronic sounds converge to create a unique soundtrack performed by some of Buenos Aires’ finest musicians and featuring a quartet of violin, bandoneon, piano, and double bass.

I’m sure most of you have heard of Claudia and Esteban. They are globally recognized teachers and choreographers. For those who don’t know, here is their bio:

Claudia and Esteban first met in the early 1990s in Buenos Aires and have been dance partners for over 20 years.  They are part of the generation that is credited with recovering the tango and creating the conditions for its current popularity. Inheritors of the greatest Tango Maestros of the 80s and 90s, between the pure tango inheritance and search of evolution of this dance, they have created a style which has been transformed into a reference for the new generations of dancers and teachers of tango. Their dance unites the essence and the heritage of the “tango de salon“ with the evolution and the fantasy of the “new tango“. Claudia and Esteban interpret styles in a transversal way, analyzing the possibilities of movement and the communication, in the logic of the improvised tango.  They continuously tour cities around the world and return regularly to Buenos Aires where they dance and teach workshops in festivals such as CITA or World Tango Festival. 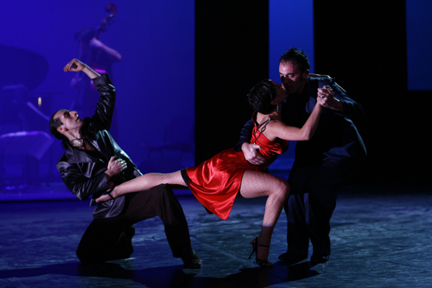 They formed Union Tanguera in 2002 in Lyon, France.

Union Tanguera has been supported by Tango de Soie, a school and home for tango in Lyon, since 2006 and has formed many important partnerships with various funding institutions in France, including La Maison de la Danse de Lyon.

Their first first full-length piece, “Efecto Tango”  in 2005, was born out of an investigation of how to reformulate the theatrical expression of tango while respecting the purity of the traditional social dance. Their next full-length work, “Tango Vivo” toured France, Italy, and Switzerland in 2006 and 2008. Both productions were co-produced with Lyon’s Maison de la Danse.

Their third full length performance, also co-produced with Lyon’s Maison de la Danse, is “Nuit Blanche” which toured throughout France and Italy in 2010 and 2011.  This is the first time the show is performed here in the U.S.

The work is performed by 7 dancers and 4 musicians. The 7 dancers include: Lucila Cionci,  Claudia Codega,  Rodrigo Joe Corbata,  Claudia Jakobsen,  Jorge Crudo,   Esteban Moreno and Rolan Van Loor. I’m sure many of you must remember Joe and Lucila’s performances here at Antipanico last year, filled with drama, passion and technical precision. Plus, they are both fun and sweet. It will be great to see them on stage in this show.

Nuit Blanche is performing only one night here in the Bay Area.  It’s this Sunday, November 17 at 7pm.

The show is 90 minutes and is without an intermission.