Stanford Tango Week, later to become Nora’s Tango week, is believed to be the first Argentine Tango Festival in the United States.

Nora, along with her late-husband Raul Dinzelbacher, were the first Argentine Tango instructors at Stanford Tango week in 1991. Nora was involved with Stanford’s yearly Tango festival until 1997, when the Stanford Dance Department decided to discontinue its tango instruction. When asked if she would like to independently carry on the tradition of Tango Week, she solicited the help and support of longtime friend and student Bob Moretti. Together they created an event that would become one of the longest-running Tango festivals in the US. Sixteen years later the tradition continues. This year the event is on a smaller scale, but still filled with great instruction and elegantly themed milongas.

Ever since it’s humble beginnings in the early 1990’s at Stanford, this festival has brought in some of the best Argentine Tango instructors from the US and Argentina. The Bay Area’s Tango community was at its very infancy, and these are the folks who brought quality instruction to this burgeoning Tango community.

This year’s Tango Festival will showcase not only Tango legends such as Nito & Elba and Graciela Gonzalez  but also dancers of the newer generation such as Ariadna Naveira & Fernando Sanchez, Miriam Larici & Leonardo Barrionuevo and Carolina del Rivero & Donato Juarez.  Plus, the line-up includes one of our favorite local Tango instructors, Felipe Martinez, who will be performing with the legendary Graciela Gonzalez at Saturday Night’s Gala Milonga. The “Celebration Milonga” on Saturday will also feature live music by Seth Asarnow y su Sexteto Tipico.

Here is the lowdown on the instructors: 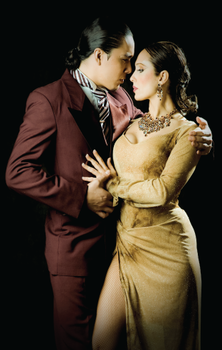 Miriam and Leonardo dance with incredible power and finesse. Now living in Los Angeles, many will know them as the Tango instructors from the dance show, “So You Think You Can Dance”. These two became first known for their performances in Luis Bravo’s “Forever Tango”. In January 2009, Miriam & Leonardo were crowned champions at the SUPERSTARS OF DANCE televised International Dance competition, representing Argentina.

Nito and Elba have been dancing together since 1977. Since 1990 they have been invited to dance and teach at festivals all over the world. Nito and Elba won the prestigious Lobo del Mar award in 1996 for their outstanding contribution to the arts and were also presented with the “Person of the City” award in Mar del Plata in 1997. Their classes are very popular, as they are known for their unique footwork, and open, friendly personalities.

In regard to Graciela Gonzales, this description by Valorie Hart of “El Firulete” says it all:  At Stanford Tango Week 1995, Graciela Gonzalez became the stuff of mythic proportions. This diminutive powerhouse of a woman was something the American tango student had not experienced. She was not part of a teaching couple, she taught alone. She was serious and outspoken. She demanded respect not only for herself and the Argentine Tango, but also demanded a self respect for each and everyone of us as dancers of Argentine Tango.

Ariadna Naveira and Fernando Sanchez are incredibly playful and musical. Ariadna is the daughter of world famous tango masters Gustavo Naveira and Olga Besio, she danced her first steps with her brother, Federico Naveira, whom she partnered for 15 years. Fernando began tango in 2001, and together they teach and perform all over the world.

This clip of them is especially fun and definitely shows their personality.

Donato Juarez and Carolina Del Rivero are very popular here in the Bay area.  They both got their start with different partners, but together, they are truly amazing.  Below is a clip of their performance at AntiPanico SF  in 2012.

Check out the class schedule here to learn from the amazing dancers.

This year’s Welcome Milonga will be held on Wednesday July 3 from 8pm – Midnight. Cover: $5