Tango music can be very uplifting. Whenever I feel sad, frustrated or anxious, by listening to Tango music, I feel immediately better, and sometimes even joyous. This is especially true when its live music. There is something about the energy produced by the musicians into the instrument that reverberates into the heart and soul of the listener. One cannot help but to be pulled with emotion by this music.  And if you know how to dance Tango, it compels you to move.

See for yourself here, with this wonderful performance at Studio Gracia Milonga last May, by world famous Pablo Estigarríbia on piano and Bay Area favorites, Seth Asarnow and Adrian Jost on bandoneón.

This May, Pablo and Adrian are partnering up together for a mini West Coast Tour!

We are in for a real treat as these two wonderful musicians will be touring together for the first time this May. Jost and Estigarríbia will present tangos for piano and bandoneón, as well as solo pieces. From classics to original compositions, their collaborations bring new life into the heart of tango — tradition layered with fresh harmonies and perspectives; stories of life, love, and loss articulated through the hands and minds of two great talents. They will be performing at both concert halls and milongas in Oregon and California! 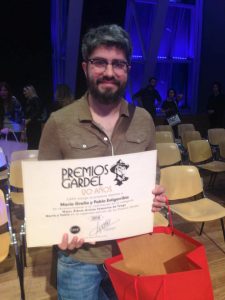 Pablo just got nominated to the 2018 Gardel awards for his album in duo with singer Maria Graña!

The ascent to a new pinnacle in tango music evolution began when Pablo Estigarribia, a classically trained virtuoso Argentine tango pianist, arranger and composer, with a rich jazz influence, discovered tango in 2005. Upon winning a grant from the Orchestra School of Tango, under the directorship of the esteemed Emilio Balcarce, with whom Estigarribia also toured Italy, his performance career continued through Germany, France, Belgium, Japan, Russia, Finland, Canada, USA and Cuba, in over 150 concerts, with elite orchestras as follows, Victor Lavallen Orchestra, Tango Pasión, Lisandro Adrover Quintet and his own ensemble, Meridional Sextet. His accomplishments include the prestigious Gardel Prize in 2015 for the best tango recording by a new artist on his album, Tangos Para Piano (EPSA), with the highest rating by a music critic from Clarín, the largest Newspaper in Argentina, the recognition of among the best tango musicians of his generation and a Medal of honor by the Argentine tango society. Celebrated by Japan in 2016 and highlighted in Seikyo Shimbun, a major Japanese newspaper, his success extended to the United States in 2017, with social media appearances on NBC, Telemundo, Univision, and mentioned in the Huffington Post.

Privileged to have studied, composed, arranged and performed with legendary tango figures such as Emilio Balcarce, Horacio Cabarcos, Maria Graña and Victor Lavallen, Estigarribia proudly continues the dissemination of knowledge and expertise of his lineage to the world. Reopening the passage of virtuoso tango music repertoire to musicians, Estigarribia published his original compositions and arrangements of traditional pieces, Tangos de Conciertos, which has been an instant hit among audiences and musicians of the US. Come and experience the exquisite fusion of classical textures, jazz harmonies and the traditional rhythm and structure of Argentine tango in Estigarribia’s powerful delivery of his unique, complex and virtuosic tango compositions. 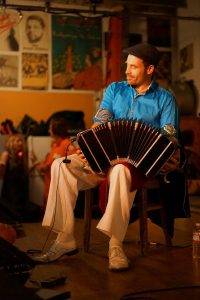 Jost started down his musical path because he liked to push buttons. “It’s funny,” he concedes, “but at first it wasn’t really the music. When I was a kid, I drove everyone crazy switching switches and pushing buttons. My uncle was a pilot. He’d take me on flights. The cockpit had so many buttons – I was in heaven. One day my family visited a neighbor and he was playing the accordion. I saw all those buttons and thought, ‘This is what I want to do!’” His parents had other ideas. “It was not the kind of instrument you’d play in a symphony; it wasn’t a ‘respectable’ instrument,” Jost says. “My mother wanted me to play the violin, the piano … I tried them all very politely and at the end of every class, I said, ‘I want to play the accordion.’”Born on the French Riviera, he first studied the accordion and bayan before coming to the U.S. to pursue a Master’s at Northwestern University. It was there that Adrian discovered Argentine tango and started the transition to the iconic bandoneón. In 2001, he co-founded Trio Garufa, a popular San Francisco-based tango group that enthralled audiences in the U.S., Europe, Argentina, Colombia, and Canada. 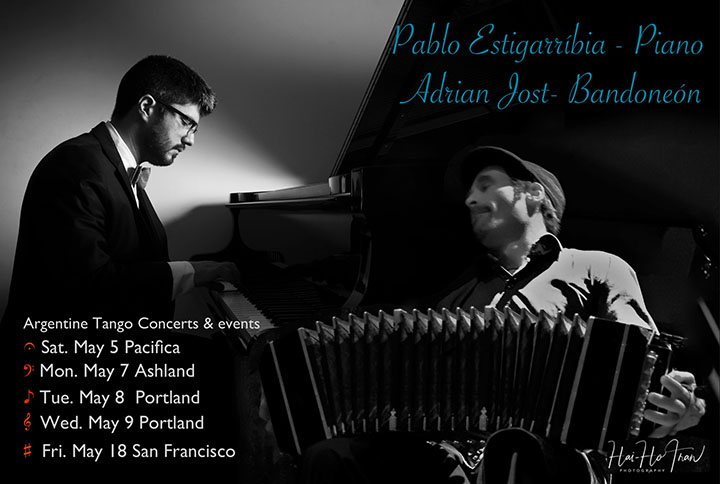 Tue May 8th, Studio Berretin, Portland, OR  (Tickets at the door)