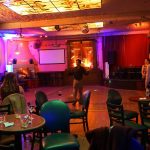 The El V Story by Andrea Bindereif   “Where did the time go?” asks Julian Ramil, and as they both shake their heads his wife Claudia repeats: “Yes, where did the time go?” We were talking about El V, one of the best-known milongas in San Francisco and beyond, and which was about to celebrate its 20th anniversary on May 30th at the very same venue where it started in … END_OF_DOCUMENT_TOKEN_TO_BE_REPLACED