Some would say true creativity can only happen when we push the boundaries on tradition.

Tango has evolved a lot in the past 20 years. But then again, it has evolved a lot since its humble beginnings on the streets of Buenos Aires in the late 1800’s. Although many still revere the “Golden Age” of tango music and dance (the period generally from about 1935 to 1952 that is still played at the milongas today) new Tango music is continuously being created. It was dear Astor Piazzola who really shook things up in the late 50’s when he began to infuse Tango with elements of Jazz. His tango’s were not intended to be danceable, but nonetheless, a few talented folks found a way.

Much as most people would never have thought you could dance tango to Jimi Hendrix, two talented dancers have done it and done it well. These are Nick Jones & Diana Cruz.

Fusion or alternative tango, can be danced to traditional tango, electronic tango and most frequently, non-tango music.  I find it amusing that Bruddah Iz (Hawaii’s legendary singer) “Over the Rainbow” is frequently on the playlist at these events.

Obviously, alternative Tango has a big draw with people who enjoy different styles of partner dancing such as Swing, Blues, Salsa or even Bachata. Alternative tango allows for a lot of personal expression, partnership dynamics and interpretation.  However, I strongly believe, some competence in traditional tango is needed in order to dance alternative tango well.  As in any art form, you need to know the rules in order to break them.

If the goal of alternative tango music and dance is to push the boundaries of tango as a social dance, both Nick and Diana definitely know how to bend the rules well.

Nick and Diana’s bio’s from naturaltango.com: 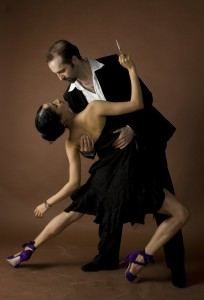 Nick Jones approaches dancing with great abandon and seriousness. Nick mixes Argentine Tango styles to create a style of dance that pushes the limits of the genre. As an enthusiastic teacher, choreographer, performer, DJ and musician he is invited to tango festivals and workshops around the world. Nick Jones has been dancing and studying since 1996. He was one of the first North American tango dancers to have been invited to teach at a festival in Buenos Aires (Pulpo’s Tango Week). Leading the NaturalTango Orchestra has given him a singular look into the inner workings of tango music, and has greatly influenced his dance.

Diana Cruz is a dancer who has dedicated her life to understanding body movement and performing. She pulls together all of her multi-disciplinary techniques (including: Ballet, Contemporary, Modern and Latin American folk dances, Pilates, Yoga, singing and many tango styles) into one cohesive dance. She uses these techniques as a base to create powerful, musical, unique performances.  Her understanding of biomechanics gives her an astute approach as a tango teacher.

As enthusiastic teachers, choreographers, performers, DJs, festival organizers and musicians Nick and Diana are invited to tango festivals and workshops around the world. They have performed the show “Tango Times” with Gustavo Naveira & Giselle Anne at the St. Louis Tango Festival “Hot Winter Tango”, as well as the “Natural Tango Festival”. They have been teachers and performers at tango festivals and workshops in the United States and Canada, and have been on tours teaching and performing in Europe and Australia.

Nick and Diana will be offering workshops and performing in the Bay Area Friday September 26th to Sunday, September 28th.

Nick and Diana’s tango workshops in San Francisco are hosted by Emily Webb who works hard to keep alternative tango thriving here in the Bay Area. Emily not only teaches tango and fusion, she also co-hosts (with Jamie Triplett) two dance events here in the Bay Area. Mission Fusion is held twice a month, and Tango Atípico is held once a month. Both are held at the incredible dancing saint’s church, St Gregory’s in San Francisco (500 De Haro Street, SF).  Their goal is to create an environment that fosters creativity in dance and DJing, as well as an open atmosphere for newcomers to dance Tango.

Some prefer to maintain traditions to pass on to new generations, other choose to push the boundaries of creativity.  Which choice is yours?