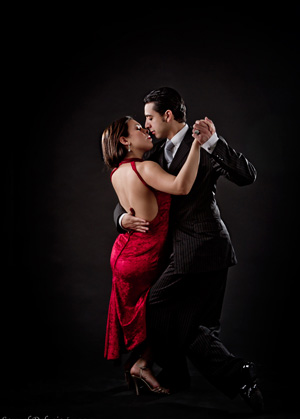 Facundo and Paola are of a generation of young dancers who are dedicated to the art and tradition of salon tango. Their independent exploration of the essence of tango salon, elegance, connection, and musicality, has allowed them to create a dance product that is unique yet traditional.

Facundo and Paola have been giving classes and performing in Buenos Aires and most recently this May they were awarded 1st prize in the Vals category in the annual Metropolitano championship (also known as the City Dance Championships). They also placed 3rd and 4th in Milonga and Tango.

The City Dance Championship is a unique event in which the city of Buenos Aires selects its best dancers, who will represent it at Tango Buenos Aires Festival and World Cup in August 2012.

Argentine Tango has grown so much worldwide that in December 2009 it was declared Intangible Cultural Heritage of Humanity, by decision of the Intergovernmental Committee of UNESCO. Similarly, in February 2010, Buenos Aires opened an official and exclusive auditorium for Tango: the “Teatro de la Ribera” in La Boca neighborhood. The auditorium’s entire program is exclusively dedicated to music typical of Buenos Aires, with milongas, shows, classes and exhibitions.

The present edition of the annual Metropolitano championship comprises the following categories: Salon Tango, Milonga Dancers of the World, Milonga and Waltz.

Here is a delightful clip of Facundo and Paola peforming a valz at La Viruta in Buenos Aires.

Catch them this Sunday at Studio Gracia as well as performing and teaching at Milonga “El Abrazo” this Friday, July 20th.

QTANGO is a Classic Tango orchestra led by Erskine Maytorena, from the USA based in Albuquerque, New Mexico.

QTANGO was created in July, 2009 by Erskine Maytorena, a third generation tango musician and opera singer.  They perform authentic Argentine tango arrangements as often as two to three times a week throughout the Southwest for tango dancers and listeners.  QTango specializes in the traditional tango music of the “Golden Age” of the great Argentine tango orchestras. Their dynamic and powerful music keeps dancers on the floor and listeners enthralled.