It’s that time of the year once again. The Argentine Tango USA Official Championships and Festival takes place in San Francisco at the end of March.

Now in its third year, this event has grown in both popularity and quality.  Andrea Monti and Hugo “Gato” Valdez, two well-respected Argentine Tango Maestros, are responsible for bringing this exciting event to San Francisco. 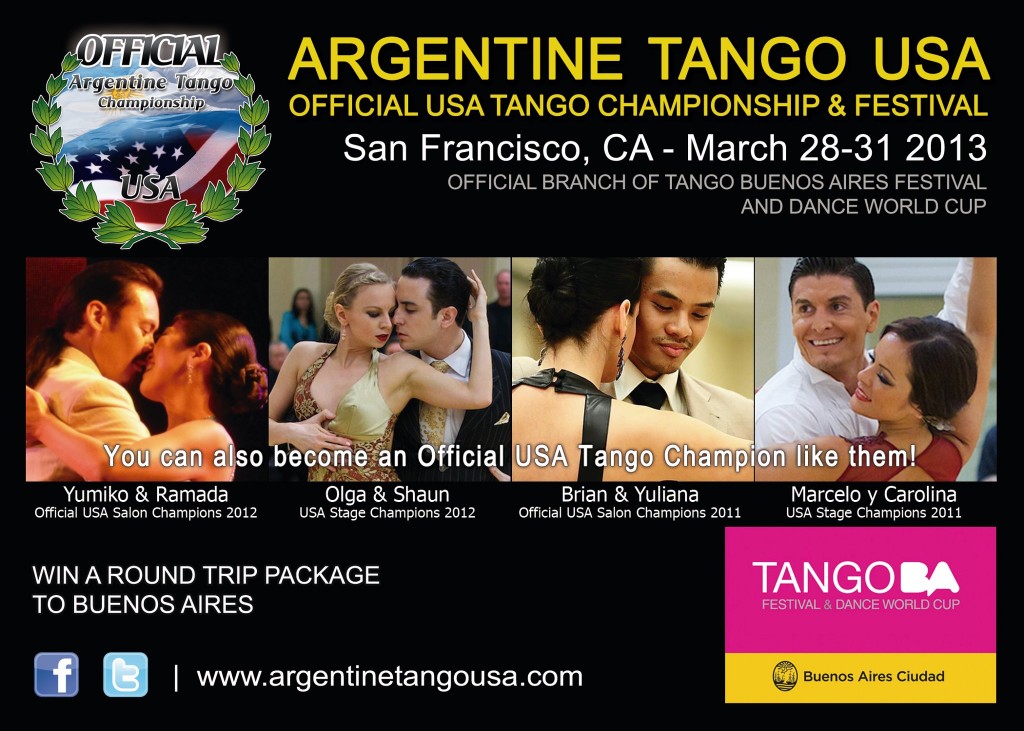 Dancers compete in either the Stage or Salon categories or both, and the winners not only earn the title of “Official US Tango Champions 2013” but also win a package to represent the US at the Tango World Cup in Buenos Aires.

Other 2012 place holders were:

The big question is who will be the winners this year.

The word on the street is that Los Angeles would love to earn back the title and will be bringing a large contingent to compete this year. And, of course, the Bay Area is usually well represented and competitors do quite well. However, the competition is always full of surprises and it’s an open call as to who will be the front-runners this year.  Competitors can be “amateurs” of intermediate level or above or “professional” dancers.

Are you interested in competing? It’s not too late!

Even if you would never compete yourself, this event is definitely worth attending.

The “Stage” category is always entertaining and thrilling. The competitors choose their own music and choreograph their own routines. Many incorporate awe-inspiring lifts and dips to thrill both the judges and spectators.  In past years, a wide range of dance levels have competed, and choreography, music choice, stage presence and entertainment value all play a big role in impressing the audience and judges.

The “Salon” category is much more tame, but equally fun to watch.  The couple’s are judged on musicality, elegance and walking style.  They are not allowed to do any Ganchos (hooks), saltos (jumps) or trepadas (climbs), which are considered “Stage” figures. One can learn a lot by closely watching each couple as they pass by on the dance floor during the three songs required for each round.  I especially enjoy picking out my favorite couples and waiting to see if my choices are the same as the judges.

Argentine Tango USA Official Championships & USA Festival, San Francisco March 28 – 31, 2013 is a unique four-day Tango event including both an international Tango festival (with workshops, performances, live music and social dancing), and the only Official Argentine Tango Competition in the US.

Being “official” means that the winning couple/s at the Argentine Tango USA Championship will get the Official Title of Argentine Tango USA Champions and will be the only USA authentic representatives at the Tango Buenos Aires Mundial de Baile (Tango Buenos Aires Dance World Cup) having the right to compete directly at the semifinal round (avoiding more than 400 competing couples that are yearly registered in the classifying rounds).

Below is a clip of competitors during round 1 of the Salon Tango Finals.

Along with the competition, the festival includes: